Warning: "continue" targeting switch is equivalent to "break". Did you mean to use "continue 2"? in /customers/4/a/b/transcommunication.org/httpd.www/templates/itcukhome4260623/functions.php on line 182 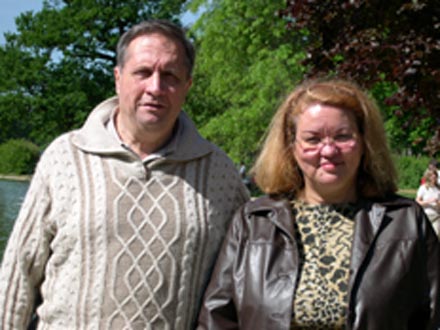 Hello! We are Maryse and John LOCKE.

Maryse was born in 1951 and is half French-half Norwegian;  John was born, a long time ago, in England and  has lived in France since 1976. Maryse is a Chartered Accountant and ran her own business until she retired. John is an Engineer in Technology, and also retired . We are living south of Paris, in the countryside, in a small village of 4 000 inhabitants. We have both been involved in the Transcommunication research since year 2000. ,

We became interested in Transcommunication after reading the book titled  "The Scole Experiment",   written by Jane Salomon. In this book, Robin and Sandra FOY, who are living in the Scole village (Norfolk, UK) reported on their amazing phenomena obtained with their Home Circle, "The Scole Group".  This book provides in details and some technical information on how they achieved these results, which included many paranormal pictures, apports, and spirit light phenomena. The English Society of Paranormal Research (S.P.R) sent some of their senior scientists, from 1995 to 1998, to investigate and validate these events, with their own strict and serious control methods. Their conclusion was  that these physical phenomena were genuine.

When we have ordered this book, we thought that it was another experiment like "the Philadelphia experiment", using magnetic field for time and dimension travels. We were wrong... we found  the contents of the book fascinating! Thomas Edison, who passed over on October 18, 1931,  came during one séance, and transmitted the plan of an electronic device which he asked the group to build,  using pure chip of Germanium ; this device was a detector which, when connected to a cassette recorder, enabled the Scole Group to hear directly the voices of the spirits and the voice of entities from another planet. The paranormal pictures received confirmed the identity of some of  these.

After having read the book, John being an engineer,  confirmed that Germanium could be used in this way,  as  Germanium is a semi-conductor which was used in the 50's and 60's, and is still used, for the communication (radios, computers, ...).

We made the decision quickly to fly in England to meet Robin and Sandra Foy at their home in Scole, Norfolk.  They invited us to visit their seance room in the basement where all these incredible events took place; they provided us all the information we needed. They have since become very good friends of ours.

After Scole visit, we went to Houffalize (Belgium) to attend "The International Congress of Transcommunication", in September 2000. More than 600 people of all nationalities were attending this important congress, including Scientists from various countries (Physicists, Chemists, Biologists, Psychologists and Psychiatrists,...), Engineers and Technicians, etc...Eight translators have been hired to cover the translation of the different languages of the lecturers. The ITC video pictures, documents and material which have been presented were so astonishing that the attendees were totally captivated. Our  feeling was that all these people were serious, passionate and sincere, and that their results were genuine.

We continued our quest to meet other  researchers in Germany and in France, which  reinforced our opinion that this research in Transcommunication was a real serious matter and would be a challenge for us . We began our  research. Robin FOY  advised us that the equipment  used in Scole and by other groups would not necessarily work for us. We followed his advice, we used the knowledge that we had learned, building our equipment from scratch, not using television or radio ( which was often seen as a reason to challenge any results.) This led us in a different direction and we started getting some good results. Further refinements to the equipment have been made, and we are now obtaining some very good results. See the image gallery. There is still a lot of research to be done, and as the results improve we will post them on this web site for all to share. We are using a computer to manage the digital video taken during the tests. This enables us to examine each frame in detail, and store the results in digital format for us.

In the mean time, we realised that we needed to work with Spirit in order to advance in our research. We felt that Trance Mediumship was really necessary to progress  in this particular domain of research in Transcommunication, by receiving direct help of the spirit scientists. With their co-operation, the identification of the images received would be easier too. In order to develop our Mediumship, we shared our time between mediumship training seminars in England, and  passionate research at Home. The distance, the financial investment and all the other barriers would  not stop us.

The rewarding is not the money! it is the success in a challenge that only some scientists pioneers have accepted to take. They were more numerous to accept the challenge in the 18th and 19th centuries; the communication with the spirits has been growing at a rapid rate all around  the world. For example in  Lyon, in France, they were 10 000 people who were involved in the research for communicating with the invisible world; with the horror of the first and second wars,  the number of these courageous pioneers has decreased.

We are in this scientific adventure since many years now, we feel like the pioneers whose experience will permit the future generations to hand down the tradition. We will try our best to transmit all what we know. Only people who have accepted "to jump into the pool", and to implicate themselves, can realise how this research is breathtaking. We will not  spend our time and our energy to convince the sceptics that the invisible world exists. This world of beyond is like a huge continent which is waiting to be discovered. For the humble researchers and beginners who need help, we are here to help and work with you.

We hope that this site will be able to provide some of  the answers to your questions.