I hope the following will help to reform some of the thinking patterns and help
in your development... As usually for all the topics proposed on this website,
if the informations below do not resonate for you, leave them.
EVOLUTION  OF  CONSCIENCE  IN  THE  MATTER :
Generally speaking, the matter is making a V shape, from the moment when it is
created in the etheric world, then it descends down in the astral world, then it
descends down to the material world. Then it begins again its ascension up in
the astral world, then up in the Etheric world… In the matter evolution, its
consciousness evolves too. 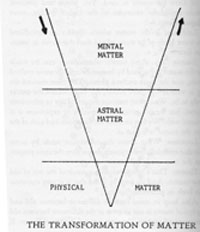 To see diagrams of  the Spirit Evolution Levels  click here
For example : Energy in its etheric state can be photons. Energy in its more dense
state can be gaz. The nearer the energy is from the material plane, the more dense
it form becomes : for example the electricity and the magnetism, near the Earth,
are more materialistic energy. Then this energy evolves in the mineral kingdom
with its own conciousness. Then it evolves in  the plant kingdom with its own
consciousness, then it  moves in the animal kingdom, then in the human kingdom.
The creatures and elementals move then in the astral plane, then up in the spirit
etheric kingdoms,...
The plant's consciousness is for example to bring us healing through the plant
medicine, and to remind us the love of the creator and the beauty;as the flower
opens, the plant shows us its gratitude and love for its care and nurturing.
Animals teach us unconditional love, balance and harmony.
Every kingdom exists in the etheric and then in the astral before to appear on
Earth.
The consciousness of the stone has attained its most evolved state when it has
become a diamond. A plant can also have very basic qualities and many defaults
at the beginning of its evolution. And thanks to the elementals who are taking
care  of the nature, and to some spirit esoteric gardeners, and some esoteric
gardeners  living on the Earth too, this plants can evolve along the centuries to its
best qualities.
The esoteric gardener, in order to create the plant’s evolution and to get some
new qualities and get rid of some defaults, will put the plant on diet in order to
create a shock, a state of crisis. In the mean time he will survey carefully that the
plant will not die. Then slowly and slowly he will feed the plant again, but this time
he will feed it with very special nutriments that he has chosen carefully, in order to
obtain the qualities he is looking for. In order to find their foods, the plants, as the
animals, will always need the humans. The more evolved consciences  must help
the less evolved.
One day, the soul that has made its thousand year peregrinations in the body of
animals, will prepare itself in the etheric plane to occupy for the first time a baby
human body. This new human conscience will stand on his two feet, but will still
have the basic survival consciousness of a horse for example. He will not realise
that his conscience is at a  basic stage of the human kingdom. He will think that
every body is like him, with the same thinking patterns (in this moment, there is a
wave of  souls who have reincarnated  on Earth in human bodies, who have the
appearance of humans, but are very bestial).
For the human kingdom, it is the same. Some guides (our "esoteric gardeners")
are helping us to get rid of our defaults through "shocks", through "crisis",
through "diets" and through "plateaus".  They help us to reform some of our
thinking patterns. To develop our awareness, our consciousness until its best
state, its maturity stage, it takes many thousands of years ! On each reincarnation,
we have to work on some aspects of our personality, get rid of more defaults, and
acquire more qualities. We have the responsibility to grow up and become more
civilised. We have to take out the horns from our heart,  and become open minded
and open hearted.
At every stage of human’s evolution or at each reincarnation, the danger is the
Ego and any degree of  its narcissism. If the person is self-satisfied, why would
she/he try to change ? The person will have to learn also to be true, to stop the
manipulations and the lies, the duplicity, the adulterous or flirting situations with
other partners,  and drop all the masks and curtains of illusions of pretender. In
the spirit world, impossible to hide one’s thoughts or emotions behind a face or
a mask, everybody know what each one is thinking, so it is better to learn to be
true and frank from the Earth !
The maturity stage of our human Conscience is when the person is no more
destructive, no more selfish, and is totally aware of his responsibility in the middle
of the community. When the person is fully responsible of his/her  actions, and
is the protector of his/her neighbours, and help the less evolved (the plants, the
animals, the children, the adults, the Earth, the planets, ...). The person, then,
develops a generous and genuine planetary consciousness.
In its ascension phase, in the various etheric dimensions or etherical planes,  the
soul or conscience of the humans has to lose more and more all the  materialistic
attachments in order to change of planes and go in the higher spheres  where the
souls with higher degrees of conscience are living. A sphere is a plane of living,
an etheric parallel dimension with all its normal social organisation.
The Earth is a melting pot where ALL the levels of conscience are mixed together :
the positives, the negatives,… In the spirit world, the spirits with the same degree
of conscience evolution are living on the same plane ;  so they live in more
harmonious atmosphere.